By Ali on August 2, 2017 in Black Lives Matter, Social Justice

Proud to be UU!

As members of Piedmont Unitarian Universalist Church, we are members of a denomination, the Unitarian Universalist Association (UUA), which includes over 1000 churches and 200,000 members! Most of us have minimal awareness of what the denomination is involved with and supporting, but the activities are impressive and ones we can identify with and which we can be proud of.

The UUA has been in the forefront of social change for almost its entire existence. Women have been ordained to the ministry in the UUA for many years. Men and women of color have been ordained, as well as members of the LGBTQ community. For the first time in 2017, all three candidates for President of the UUA were women. Rev. Susan Frederick-Gray from Phoenix UU was elected.  The previous UUA president Rev. Peter Morales identifies as Latino and the three previous interim UUA co-presidents Revs. Sofia Betancourt, Bill Sinkford, and Dr. Leon Spencer identify as people of color.

UUs have been deeply engaged in recent years in numerous justice issues: 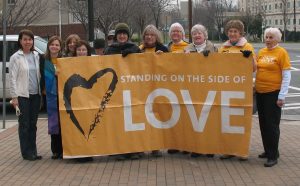 In different years, one or another issue seems to move to the forefront. In 2011, at the UUA General Assembly in Charlotte, LGBTQ rights were prominent. The Standing on the Side of Love Campaign was introduced around that time. At the General Assembly in Phoenix, Arizona, several years later, immigration was a major concern in response to repressive legislation and acts against Latinos.

Rev. Leland Bond-Upson, our interim lead minister, wrote recently that he considered the current UU focus on Black Lives Matter and the issue of white supremacy and racial justice to be the UUA’s most important issue.  In the 1960’s many ministers and lay members participated in civil rights marches and activities led by Rev. Dr. Martin Luther King Jr.  The work of Dr. King and his associates and allies made important inroads but did not end racial injustice which is still endemic in American life.

After Rev. Peter Morales resigned in the spring of 2017, the UUA Board appointed three co-presidents, Rev. Sofia Betancourt, Rev. Bill Sinkford, and Leon Spencer, and strongly committed the denomination to address white supremacy within the denomination and in our society. Hundreds of congregations, including all three Piedmont UU Church gatherings, participated in White Supremacy Teach-Ins, initiated by the UUA.  In June, the planners of General Assembly brought a renowned black lawyer, writer, and activist Bryan Stevenson to deliver the Ware Lecture at General Assembly. Stevenson is the author of Just Mercy, the critically acclaimed New York Times bestseller and the UU “Common Read” for 2015-16.

A religious community gathered in love, the Piedmont Unitarian Universalist Church nurtures the spirit, cherishes diversity, and cultivates justice. We invite you to join us.