General Assembly (GA), the annual gathering of UU’s from all across the country, is always an event with a lot of excitement, excellent music with a choir drawn from a large number of congregations, great sermons, inspiring services, and important decisions that will impact the direction of the denomination in years to come. It was held June 20-25, 2017, in New Orleans, Louisiana. The inspirational opening event is the Parade of Banners of all congregations represented at GA. In 2011, GA was here in Charlotte, and Piedmont UU Church led the parade, with Jeff Blum and Anne Laukaitis carrying the beautiful Piedmont UU banner made by Merna Hesse. Piedmont UU Church was accompanied by the Unitarian Universalist Church of Charlotte and the UU Fellowship of Lake Norman. 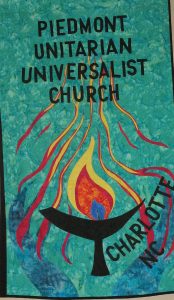 This year, for the first time, three women were the candidates for President of the Unitarian Universalist Association (UUA). All were very highly qualified and conducted a campaign that was positive and upbeat. Rev. Susan Frederick Gray, pastor of the Phoenix UU Church, is the new president from June 25, 2017 until 2025. In her opening remarks she explained that she is not actually the first woman president, because Rev. Sofia Betancourt served with two other co-presidents for the remaining several months this spring of the term of Rev. Peter Morales.

A quote from her acceptance speech:  “We have much work to do. I believe we are up to it. I look forward to working with you on this transformative path ahead.”  From the UU World, magazine of the Unitarian Universalist Association: “Throughout her campaign, which she launched in March 2016, Frederick-Gray championed the UUA as a voice for love and justice. She promoted a three-point vision of a ‘spiritually vital’ movement ‘grounded in relationships’ and ‘organized for impact.’” 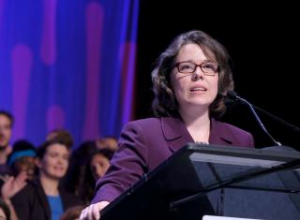 Susan Frederick Gray  “‘This is a defining moment, and the stakes are very high,’ Frederick-Gray told the assembly, which is meeting in New Orleans June 21–25. ‘We have deep work to do within our association and our tradition, and critical work to do beyond the association.’” [Photo and quote from UU World article]

Besides the election, two highlights of the week were the Service of the Living Tradition and the Ware Lecture. At the former, ministers are recognized and honored, including those who are receiving preliminary fellowship, final fellowship and retirement from active ministry, and those ministers who have died in this past year, as well as religious educators and music directors. Rev. Cheryl M. Walker, minister at the UU Church in Wilmington, delivered the sermon. Rev. Cheryl has served as mentor to both Rev. Robin Tanner and Rev. Mary Frances Comer. 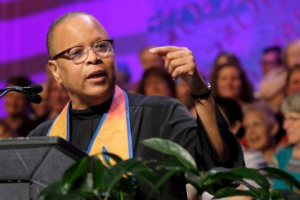 Cheryl Walker, “‘Go out and climb your own mountains. Speak your own truth. Make your own impact. Make your difference. This is what we are called to do—not just those of us on this stage, but each of us who call ourselves Unitarian Universalists,’ said Walker” [Photo and quote from UU World article]

The Ware Lecture has brought many of the country’s most outstanding leaders and thinkers over the years starting in 1922. Past speakers have included Krista Tippett, Cornel West, Sister Simone Campbell, Marian Wright Edelman, Rev. Martin Luther King Jr., and Karen Armstrong.

Bryan Stevenson, a renowned author and civil rights attorney, delivered the Ware Lecture this year. Mr. Stevenson is a widely acclaimed public interest lawyer who has dedicated his career to helping the poor, the incarcerated, and the condemned. Mr. Stevenson’s work fighting poverty and challenging racial discrimination in the criminal justice system has won him numerous awards.  He is the recent author of the critically acclaimed New York Times bestseller, Just Mercy, which was named by Time Magazine as one of the 10 best books of nonfiction for 2014. 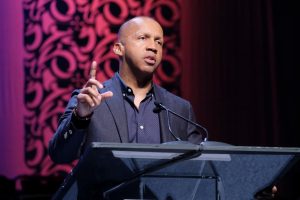 Bryan Stevenson “There are four essential things that we must do to create a more just and equal world, Stevenson told UUs: Get proximate to the poor, the excluded, neglected, and abused; change the narratives that underlie racism and other inequalities; stay hopeful about creating justice; and be willing to do uncomfortable things. He has spent his much of life in proximity to the poor, neglected, and abused.” [Photo and quote from UU World article]

The services, speakers, and seminars over the five days of the General Assembly reinforced the intense commitment of Unitarian Universalists to civil rights, Black Lives Matter, immigration reform and the care of the environment.

Five members of Piedmont UU Church were designated by the Board of Trustees to serve as delegates electronically and were eligible to vote in the UUA presidential election. They were Eva Dew Danner,  Lynne Godfrey, Hugh Hammond, April Lamanno, and Anne Laukaitis.

A religious community, Piedmont Unitarian Universalist Church nurtures the spirit, cherishes diversity, cultivates justice and radiates love. We invite you to join us.