From Your Interim Minister

Piedmont UU Church’s financial difficulties continue apace. If the trend doesn’t change, the condition will worsen, and soon. We have gained some members since Rev. Robin’s departure, but our Membership Team reports that we lost at least 30 once she announced her departure on April 8th, 2016. These were apparently people who were attached more closely to the person of the minister than to the community, or to liberal religion. This is common with energetic and charismatic leaders. Unfortunately, the 2017 budget was based on a significantly larger membership than we actually have. I am told the high-water mark was 271, and is now 221.

Here is a graph of the giving by the congregation in 2016.   The red line tells a dramatic tale of ‘unhealth.’ The blue 2013 line is only a little better, because the second quartile (26 to 50%) out-performed later years. Overall, in 2013 there were fewer pledges, and the size of the largest gifts was smaller than 2016 and 2017. 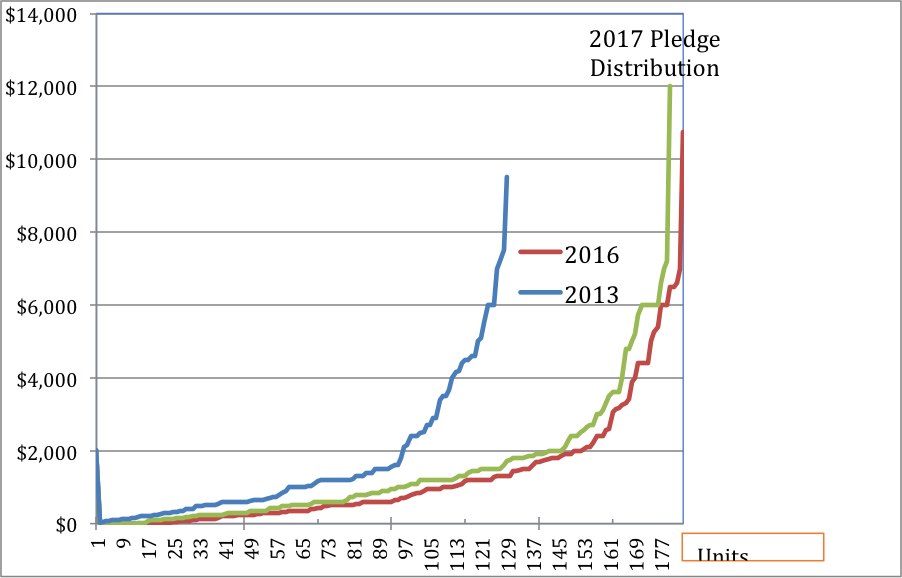 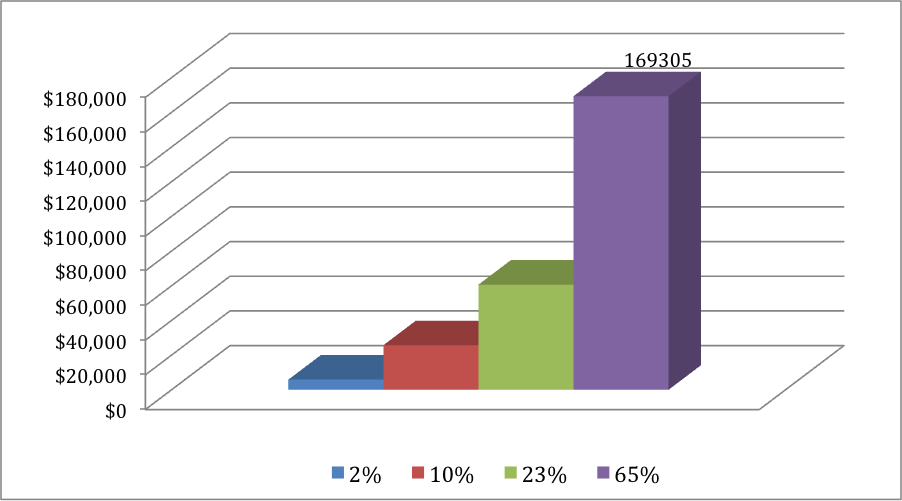 This graph shows the congregation’s total pledges broken into ‘quartiles,’ four equal blocks, 55-60 members each. The percentages shown for each quartile is that block’s contribution to the total pledge drive done last fall, $260,000.

What is wrong with this picture? As you can see, two-thirds of the Church’s support is coming from a quarter of our families. If even one of these supporters departs for any reason, the Church’s operating income takes a body-blow. We are dangerously reliant on just a few. A healthy giving pattern would produce a version of the graph that steps up from the first 20% of donors, to the next and to the next, and onward up to the final 20% in a relatively smooth angle.

The inescapable conclusion is that the members in the middle 50% are relying on the final 10% to do the proverbial heavy lifting.

Dear middle 50%ers: please find where you fall in this chart, consult with whomever you need to, and make a new contribution that will help straighten out the line of the graph to a healthy 45­° angle.  [Thanks to Lisa Dickinson for the graphs.]

If you want the Church to continue on its path onward and upward, please make your decision to help immediately. There was a long, tough Finance Committee meeting on Saturday, April 29, called to explore options for reducing expenses, followed by a long, tough Board meeting Tuesday, May 2. This is to be followed by a town hall meeting on Sunday, May 7.

Other things members and friends can do:

The Church will survive, but what do you want it to look like? How much are you willing to do without, and for how long. It’s time to rally, to step up.

Please attend the Service this Sunday and the town hall meeting that follows immediately after.

A religious community gathered in love, the Piedmont Unitarian Universalist Church nurtures the spirit, cherishes diversity, and cultivates justice. We invite you to join us.